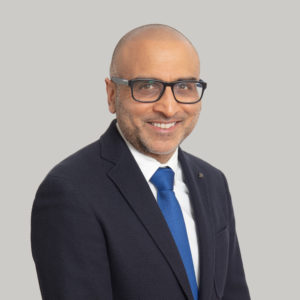 Dr Ajay Birly is an experienced General Practitioner. He had been a General Practitioner for over 20 years. After completing his training on the Westminster Hospital GP vocational training scheme in 1994 he carried out locum work for five years in order to get a wide experience of General Practice.  In 1999 he became a GP Principal in West London. He was also a Senior Forensic Medical Examiner (Police Surgeon) for the Metropolitan Police in London for 13 years between 1994 and 2007. He received an award from the Law Society in relation to his forensic work. He became a Police Surgeon at the age of 28 and was one of the youngest doctors ever to be appointed in this role.

He currently works as a GP Principal at the Acorn Medical Centre in Hillingdon, Uxbridge. His practice has about 6,200 patients and he leads a team of General Practitioners, Community Pharmacists, Practice Nurses, Dieticians and administrative staff.  He is also the Clinical Lead for his local Primary Care Network (PCN) and he was elected into this role by his fellow General Practitioners. His PCN represents seven local practices with a total practice population of about 40,000 patients. Dr Birly also works for the Ministry of Justice as a Tribunal medical expert and has substantial experience in examining medical records and identifying the relevant medico-legal issues within them. A significant part of his Ministry of Justice role involves explaining to Judges the significance of the medical evidence before them. Dr Birly has worked with hundreds of different Judges over the years and has good knowledge of how they think and what they are looking for in a medical expert.

Dr Birly has given oral evidence on numerous occasions. He has given evidence in crown court (including ‘The Old Bailey’) on matters of fitness to interview and opinions on ‘drink- drive’ and ‘drug drive’ cases when he was a Police Surgeon and has attended numerous case conferences for civil medical negligence cases.

Dr Birly has experience of providing reports in various legal proceedings.  He is most commonly instructed in the following types of cases:

Dr Birly has good availability. Dr Birly organises his work well and can usually provide a personal injury report within about two weeks of seeing the claimant and a medical negligence report within about four weeks of agreeing the instruction. For personal injury cases Dr Birly sees claimants face to face at his practice in Hillingdon, West London or by video consultation. Dr Birly’s practice is very accessible by car (easy links to M4 and A40) and is also a 20 minute walk from Hillingdon Underground train station.